In the end of January in 1999, Doug Aldrich and Keith St.John went to Japan to promote their debut album Burning Rain. During their stay, on January 30th, Bad Moon Rising Fan Club Presents Fan meeting was held in Tokyo and Doug and Keith attended it as special guests.

The fans created Band logo, CD jacket, illustration, and etc...
Doug and Keith picked the best one each. 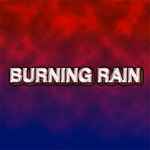 * See the bigger
* Register your Birthday! (How to)