Doug and I finally got a chance to catch up, to talk about the new Whitesnake album, and life as a working Dino guitarist in 2008. Check it out, it's a good one.

at Wembley Arena in London, England

If that quedan hours to start the tour by Whitesnake our country, we publish this telephone interview with Doug Aldrich, one of two guitarists of the White Snake ... Read more

The Classic-rock heroes bring Whitesnake after ten years of silence the new album 'Good To Be Bad' on the market - we have on the road and guitarist Doug Aldrich sound studio in his visit. The result is a workshop of the highest class! 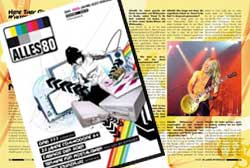 The comeback after eleven years: Die Hard rockers present their new album "Good To Be Bad" and are currently on a world tour. The new guitarist Doug Aldrich in the interview. 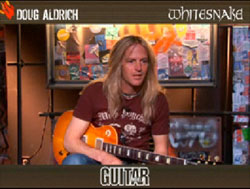 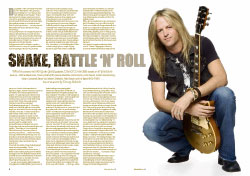 Article and Interview on UOL Musica

Whitesnake brings to the Brazil tour of "Good to Be Bad," the first album of new compositions in 11 years..... Read the rest

Article and Interview on The Shropshire Star Newspaper

"I'm really proud of this album," says Aldrich, on the phone from his LA home, and only slightly distracted by his new puppy trying to get in on the conversation..... Read the rest

I did the best that I could on this project and it was a rewarding experience. I am just glad that it is over because it really kicked my ass.... Read the rest

Interview on The Classic Metal Show

Interview with Doug Aldrich on BigMusicGeek.com

I was playing in the band Dio with Ronnie James Dio...and the Scorpions came to Ronnie and said "We're doing this tour next year with Whitesnake. David Coverdale is reforming Whitesnake... Read the rest

Doug Aldrich Talks Good To Be Bad on Melodicrock.com

Good To Be Bad was a total commitment and very focused from the start... Read the rest